Hecate, or Hekate, is the Greek goddess of magick and witchcraft. She carries a torch to represent her descent into the underworld in search of Persephone. The dogs at her feet accompanied her on her journey. Hecate is commonly known as Queen of the Night or Queen of the Crossroads.

As a goddess of death and rebirth, she is often invoked by necromancers. She is the keeper of the keys that unlock the gates to the spirit world. Call on Hecate as a mediator of communication to spirits. She rules vengeance and can be invoked to bring justice, especially for sexual crimes against women. Because of her pack of barking dogs, Hecate can also be invoked in areas of protection for dogs.

As the Queen of Night, Hecate only accepts offerings and petitions after nightfall. She favors women, witches, midwives, herbal healers, dog lovers and those who ride horses. In later depictions of Hecate, she has three faces, each watching the three paths. If you are at a crossroads, whether it be literal or metaphorical, call on Hecate to light the way. She sometimes appears as a serpent, as you see shown slithering up her back.

Thank you for visiting our shop!

Good item and worth the costs. Good company to do business with

Good item and worth the costs. Good company to do business with

Let customers speak for us 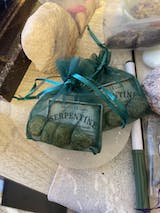 It’s a nice size. I’ll always carry it around and it looks authentic. I love it!! 🥰🥰🥰

S
Tree to be Planted Stefany Gravley (Washington, US)

Tree to be Planted